3 Unmissable Shows Coming to The J Near Seachange Coolum 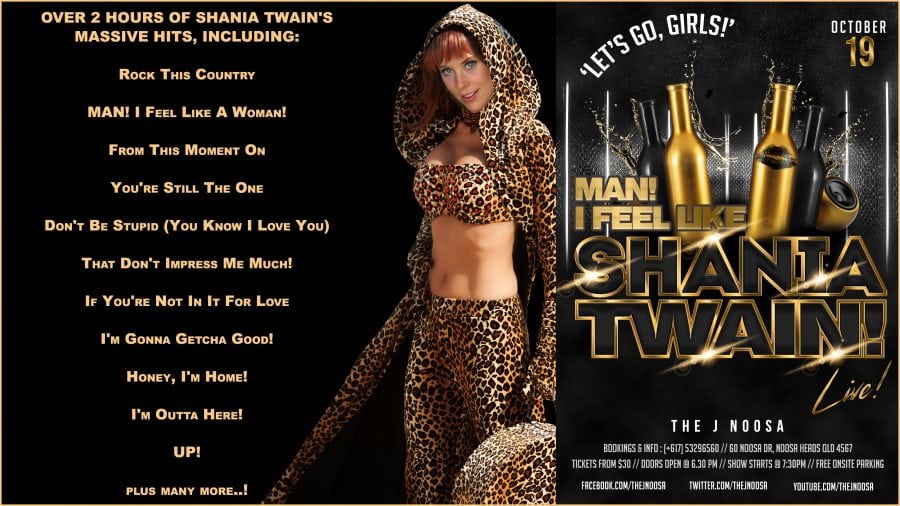 Featuring all the costumes and hits of the “Queen of Country Pop herself, Man! I Feel Like Shania Twain! is the ultimate tribute show to one of Canada’s bestselling female music artists. Having sold over 100 million records with hits such as “Man! I Feel Like a Woman!”, “That Don’t Impress Me Much”, “You’re Still the One”, “Any Man of Mine” and more, Shania Twain is one of the best female artists to come out of Canada, with a successful career that’s spanned more than 30 years. In Man! I Feel Like Shania Twain! you’ll feel like you’re watching the Shania Twain in the flesh, and for her Aussie fans in Queensland it’s not to be missed at The J on October 19.

Eireborne – The Rebirth of Irish Dance is Irish dancing in all its glory featuring world-class performers from iconic Irish shows such as Lord of the Dance and Riverdance. Dancing to an all-Irish soundtrack with songs from U2, The Script, Van Morrison and more, Eireborne – The Rebirth of Irish Dance is guaranteed to have you captivated from start to finish and dancing all the way through. Catch this Irish super-show for one high-energy evening of traditional Irish dance at The J on October 31.

For a family-friendly show of magic and comedy don’t miss Nickleby the Magician’s fun new show coming to the Sunshine Coast. Having performed to over a million people all over the world and now back with brand new material, Nickleby the Magician is a treat for all ages at The J on October 2.

To book the perfect stay on the Sunshine Coast near The J in Noosa Heads choose our affordable Coolum Beach apartments at https://seachangecoolum.etourism.net.au