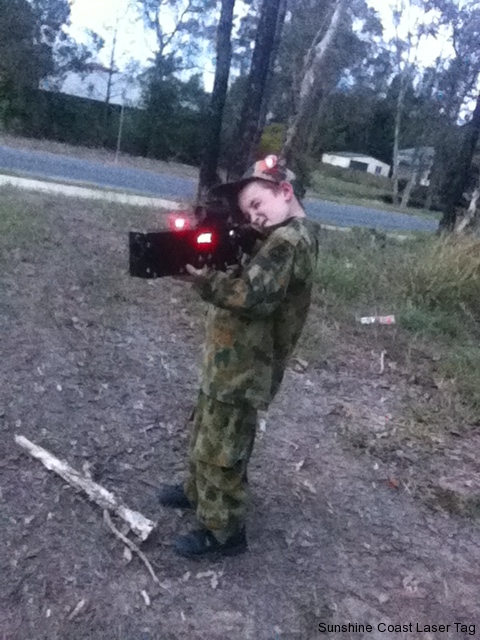 You can play shoot-em-up without getting bruised, wounded or hurt at Sunshine Coast Laser Tag.

Laser Tag is a high-tech and entertaining recreational activity that men and women of all ages and skill can play.

Sunshine Coast’s Laser Taggers have the same infrared emitters utilized in 90% of all remote controls thus it is completely safe. An infrared light signal is instantly picked up by highly sensitive sensors connected to the Sunshine Coast laser tag caps as well as the sensor present on the tagger of your competitor. Information passes through the on-board computer for a hit to be registered on the tagger. The tagger exclaims “Ouch” and all four sensors flash to signal a hit. “Life” is then instantly deducted.

Every tagger carries sci-fi noises and modern military sounds anytime you shoot, get hit or reload.

Mobile Laser Tag mixes computer game and physical activity and can be done as a team-building effort to foster cooperation while having fun all at the same time.

Mobile Laser Tag can be operated in any area, big or small. It can be played in the backyard, tennis court, park, open field, thick bush or around buildings.

Inflatable urban fields can also be rented to enhance your gaming enjoyment. Inflatables are made of reinforced PVC, akin to jumping castles children play with. These can be set up on any field and watch the area transform to a fun haze of bases, mazes and obstacles.

“During the holidays I took our son (7) and friend (9) and booked them in for an hour of "shoot em up". They didn't like it, they LOVED it.”

She describes how her kids played with the laser tags and how they were helped by Sunshine Coast Laser Tag’s staff:

“There were 2 teams (on this occasion 2 teams of 4 people) and they got caps with sensors on connected to the laser gun. They ran around the empty school campus shooting at the other team. The teams were led by young gentlemen (very responsible and I had no problem leaving the boys in their care). Unlike paintball, there are no bruises – they were totally injury free after the exercise, and unlike other laser gun places in closed in buildings, they ran around in the fresh air, mostly in the shade of the buildings.”

Sunshine Coast Laser Tag is located at 2 Arcoona Road, Coolum Beach, Queensland 4573. It is a short drive from our Coolum Beach Apartments.

However, Sunshine Coast Laser Tag can also come to you and set up their Mobile Laser Tag wherever you may be. Go to http://sunshinecoastlasertag.com to know more or call  0754461295.

Book your stay now at our Coolum Beach Apartments by visiting http://seachangecoolum.etourism.net.au.