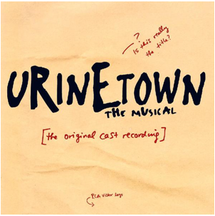 The Tony Award Winning Urine Town: The Musical premiers on the Sunshine Coast. Catch this acclaimed musical from October 26 to November 11 at Coolum Civic Centre, Coolum, within walking distance from our Coolum Beach Apartments.

Linda Gefken directs Urine Town: The Musical, a satirical comedy musical by Greg Kotis and Mark Hollmann. The show parodies musicals such as The Cradle Will Rock and Les Misérables, and the Broadway musical itself as a form. In reverse pantomime style, the unconventional plotline shatters audience expectations of a somewhat pleasant ending.

Set in a mythical place in the future, a terrible water shortage, caused by a 20-year drought, has led to a government-enforced ban on private toilets. The citizens must use public amenities, regulated by a single malevolent company that profits by charging admission for one of humanity's most basic needs. Amid the people, a hero decides he's had enough, and plans a revolution to lead them all to freedom!

Be sure to watch Urine Town: The Musical. You’ll definitely want to spend a penny to see the show.